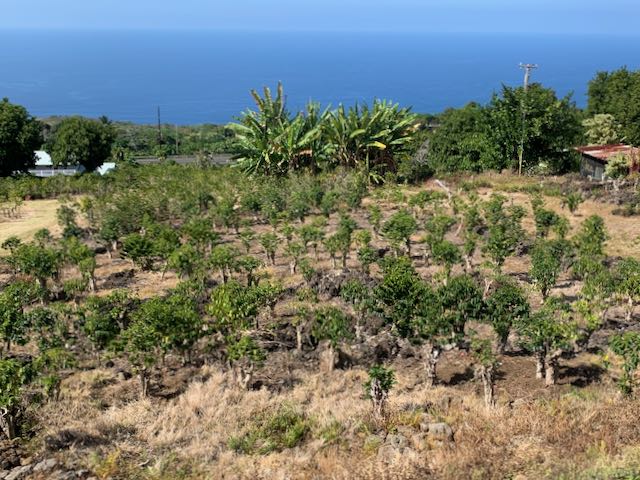 What’s Dry January? Committing to no booze for a month after a perhaps-too-indulgent holiday season.

The dry season for our coffee, usually November through March, was slow in arriving.  Even the second week of December, it was raining lightly every late afternoon.  Then it became occasional drizzles.  Then we had a thunderstorm on the day after Christmas.  Two more dry weeks followed. The leaves on the coffee were drooping down.  When you dry farm, you’re dependent on natural rain.  We needed rain!  So many afternoons the skies would darken and you could feel the weight in the air becoming heavier, but it just wouldn’t rain. The upside is the weeds also suffered and slowed down, I got fewer mosquito bites, and the nightly coqui frog chorus was significantly quieter.

We finally got some decent rain for a couple of hours this past Saturday, exactly two weeks from the last soaking. This one wasn’t a soaker and didn’t last too long. It’s something, though.

The trees that were pruned almost a year ago look pretty good. The trees need another round of grooming, like men touching up their beards. We need to remove the little growth other than the main verticals we want to keep. The vog since winter solstice is lighter; you can see the line between ocean and sky, and the sky is blue, but not deep, clear blue.

On another note, continuing on a theme of a previous post, we bought another small fruit tree (rollinia deliciosa) to plant, this time from a plant nursery. We quarantined it on gravel, with a ring of diatomaceous powder surrounding the pot, and did the little fire ant test. This time it seems there might be LFA. Oh no!! Hubby has been fretting for days, constantly researching on the internet, going on shopping scavenger hunts for various products, trying different things and retesting, then agonizing that he’s exacerbating the situation. He heard stories from other customers at Lowe’s garden department about how problematic LFA are and how one person’s cat is going blind because of them.

He did another popsicle stick test and froze the ants. This morning we brought it into the nearby CTAHR (College of Tropical Agriculture and Human Resources, University of Hawaii) office, just a little over a mile away. When we walked in, the first word out of the nice lady’s mouth was, “Ants?” We’re nervously waiting for the results and advice from the local expert and hoping whatever ants we do have will die or at least not spread off the rollinia. And please don’t be LFA! This stress is one of the reasons why hubby won’t even consider a Dry January. 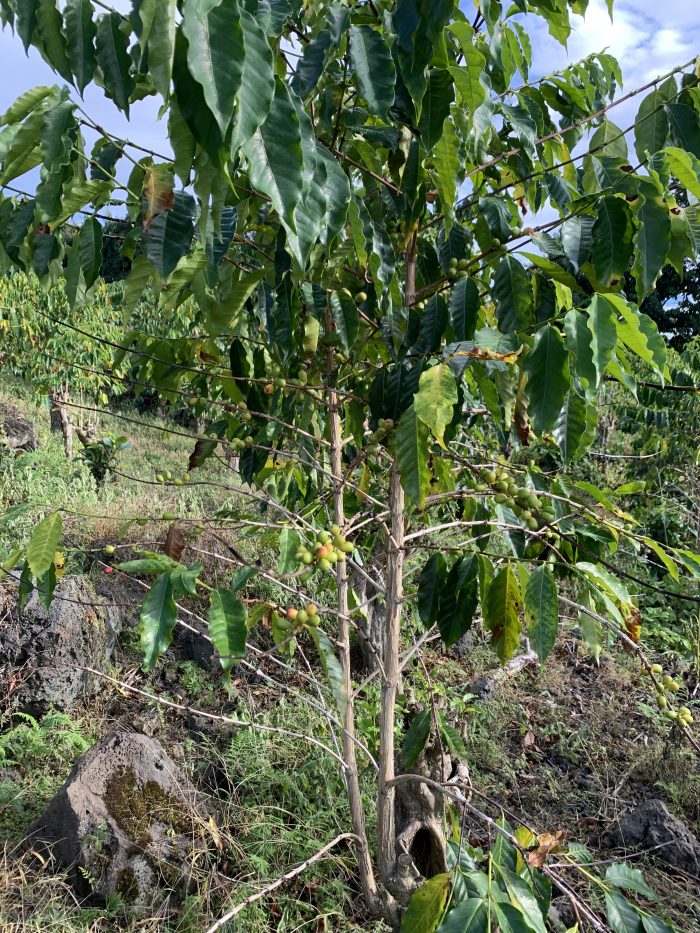 We did our first dry milling last week, a portion of the 2020 harvest. We’re waiting to finish harvesting, wet milling, and drying/aging parchment to do our final, larger dry milling. I’m very happy to report that so far we already have 23% more cherry than we did in 2019. We aren’t yet done harvesting (maybe one more small picking), but there isn’t much left. The photo for this post shows one of the trees that still has berries. The trees look worn out, plus we’re exiting Kona’s rainy season (opposite of Hilo and the rest of the state, who are just entering theirs), so they’re thirsty. We were fortunate to have good rain both last year and this year.

However, as I mentioned two posts ago, we now have coffee leaf rust (CLR) to contend with. At the time of writing, there was tentative CLR in Hilo, the other side of our island; that was determined not to be CLR. But in the meantime there has been confirmed CLR found in the Kona region, in Holualoa. Our address is Holualoa because that’s the post office that serves us, but we are actually in Honalo, a few miles south of Holualoa. Still, very close. Much closer than Hilo or Maui.

We are currently putting together our plan to either treat or help prevent the spread of CLR.  In an effort to learn more about spraying techniques, we are going to be spraying one of the approved fungicides as a preventive measure.  This allows us to fine tune our spray practices and also to potentially curb any CLR that may be present before it becomes an issue.  This is the scary prospect we’re looking at:

Over a three- to five-month period, one CLR lesion can produce upwards of 400,000 spores that become airborne and easily spread throughout a farm and between farms. If left untreated, berry production and foliage losses caused by CLR on non-resistant coffee varieties can be significant, ranging between 30% and 80%. Yield is completely lost when the tree is killed.

University of Hawai’i at Manoa, College of Tropical Agriculture and Human Resources

Sigh. We must rise to the occasion and think resiliency. Just like with COVID-19. It’s here. We have to deal with it wisely, study the science, and learn from others’ experiences how not to get infected, how not to spread it, and best practices to follow if we do get it. 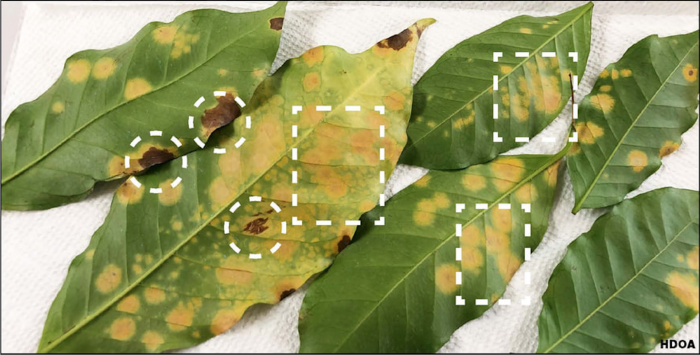 What now? Coffee leaf rust. This highly infectious plant disease has bedeviled all major coffee growing areas in the world, but Hawaii state had remained untouched until over a week ago. Unfortunately, it’s been found in quite a few acres in Maui, both on a managed coffee farm and a wild coffee area. On this island, we’ve been warned and reminded not to bring in any green beans, plant matter, etc. from other islands. But shortly after learning of Maui, we heard there’s an area in Hilo, east Hawaii island, where there’s suspected coffee leaf rust (CLR).

The sentiment is that the coffee farming community was a little behind in fighting against coffee berry borer (CBB) beetle. With CLR, the sense is we can stay ahead of the problem. I know I’ve heard about the problem from multiple angles, how to report, what to do, etc. We have to be vigilant and try to be optimistic.

From experience gained in other areas of the world, the best way to control is by planting trees that are resistant to CLR. We don’t yet have these types of trees. In the meantime working with the trees we have, a consultant writing to the Kona Coffee Farmers Association shared strategies to help achieve the goal:

The goal is keep coffee leaves healthy and clean from CLR during the early coffee season (March – July ) when berries are growing and support the growing of foliage all time.

Here are a few links for more info:

The nitty gritty from the Coffee Ed site, an amazing resource for coffee farmers. I really admire and thank them for how quickly they’ve gotten this info up on the web. 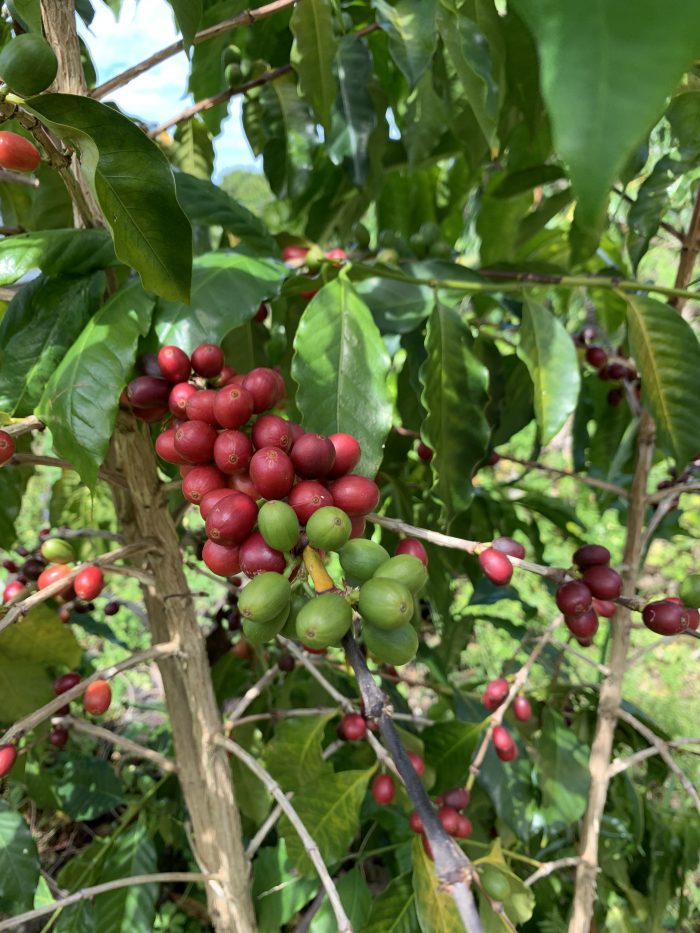 On our farm part of our coffee berry borer (CBB) management is to do a 30-tree sampling method monthly throughout much of the growing season. We did the sampling yesterday. Imagine walking the farm, trying to find 30 scattered trees that should somehow represent the farm. And those trees should have 30-120 berries on a mid-tree lateral branch. We know we’re coming to the end of the season when it’s hard to find many trees throughout the farm with enough fruit on one branch to even do this sampling.

You count (a) the green berries and (b) how many green berries are infested and (c) you collect a few samples from each examined branch. Later you cut each of the collected specimens and examine how deeply the beetle has bored, and you just track a lot of quantitative data.

There will be another picking this week, and maybe one more, before we do the strip pick, which is simply for beetle hygiene. We remove and dispose of all fruit to eliminate any beetle homes. Happily, our farm is looking pretty good. We found a couple of small hot spots, but at least we know about them. We simply do the best we can.

The day we pick, we start wet milling the coffee. This page describes the wet milling process.

So you can begin to appreciate how many variables there are to experiment with, let’s just touch on fermentation. Some producers use a fermentation process to create a certain flavor profile. This article talks about what fermentation is and why producers might experiment with it. This other more recent article talks about fermentation experiments using fruit. Coffee producer nerds can really geek out. We don’t have any plans to try fermentation. We are too small a farm, still too unknown, and it feels too risky. If we were a boutique farm, able to sell out of coffee at >$100/pound and had a trusting customer base, maybe.

I’ll close on a different sense of ferment and experiment …

The ferment and viability in any society is directly proportionate to the number of people actively living their ideas. This is not positive thinking — it is positive action: the spirit of experiment. 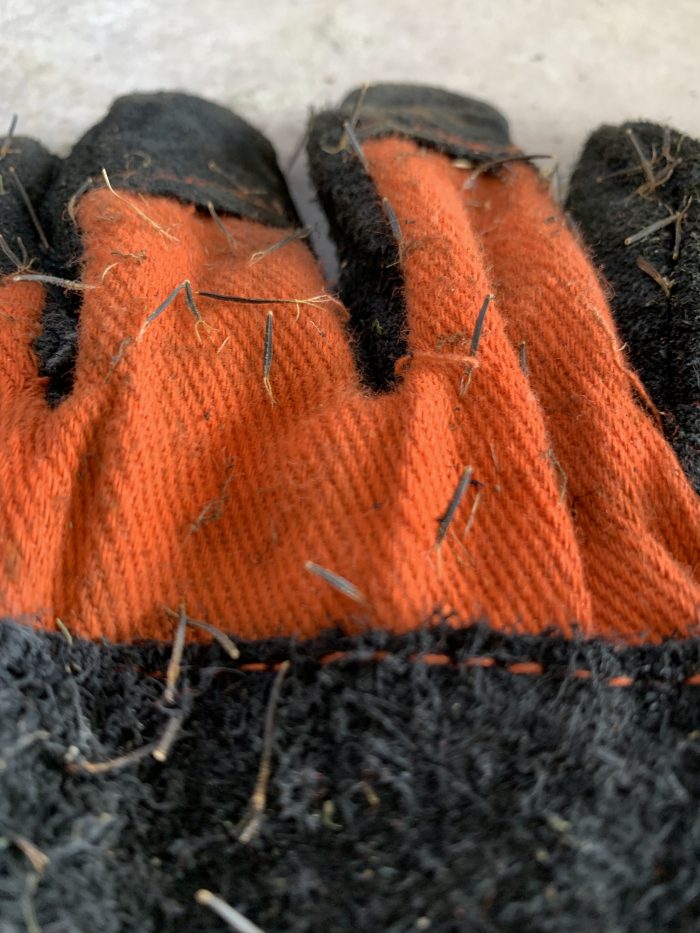 We’ve still been getting almost daily rain, usually in the late afternoon or night. Sometimes it comes down pretty hard, but the land takes it in. No mud or puddles in the morning. We swear the weeds seem to grow inches with each rain, though. That’s mostly what’s going on on the farm now … weeding, while we wait for more berries to turn red.

I didn’t get the good photo of hubby, who looked like a porcupine yesterday, with needle seeds sticking out everywhere. He said the weeding wasn’t as bad as trying to get the needles out. He spent an hour just with his t-shirt and didn’t even finish. Other clothing items would be groomed out another day.

On a completely other note, here are two articles essentially sharing the same news about research into acidity and antioxidants in cold brew versus hot coffee. A friend recently shared that one, and I filed it away to share with you all, and rediscovered the same news I had filed away half a year ago. I thought the news sounded familiar. Ha ha.