Hawaiian word for the day: Kekemapa. December. The last two weeks flew by! Months ago I invited two friends from California to join me at Daifukuji temple for the Rohatsu sesshin, sometimes called a Zen retreat, a time of intense meditation in celebration of Buddha’s enlightenment. I had something in mind, where we’d have a lot of quiet time, bracketed by morning and evening meditation, and there’d be yoga, cooking and enjoying a main meal, maybe just one local activity at some point in the day. It’s grounding to spend time this way during a typically hectic, increasingly commercialized holiday time.

Well, there’s vision and there’s reality. The three of us have spouses, and they played in. I asked Hubby to go somewhere for the week+, since he doesn’t practice these activities, and it’d be weird to have someone in the house on a completely different schedule who’d probably want to watch TV and listen to music. The two from California and their spouses had never been to the Big Island. I haven’t seen any of them in person in over two years. There were multiple factors affecting how the days actually went. Not the least was Mauna Loa erupting!

The time was very fun, meaningful, and I think will bear a lot of fruit in the future because of so many personal connections made. And you learn more about your friends by living with them. One surprise for me was that one friend is a bit spooked by creatures. I had been periodically sending her photos of the various sea creatures I’ve encountered, and she had probably always been having an “ewww!” reaction. And I realized how much I’ve been delighting in discovering all the various creatures here when I’d tell a story and then see her cringe. There I go again, freaking her out.

The other friend was a sea creature magnet. In our swims together, he was fortunate to see all kinds of things it usually takes us many swims over months and years to see: mantas, a sandbar shark, octopuses, turtle, dolphins, eels, and the usual array of reef fish. 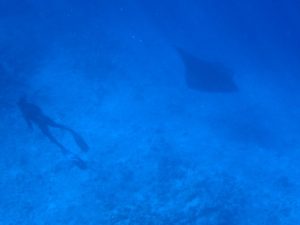 Unknown diver provides size perspective for this manta in the deep water. 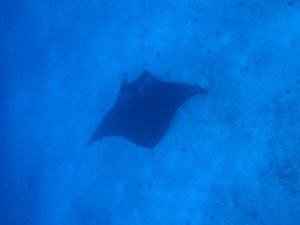 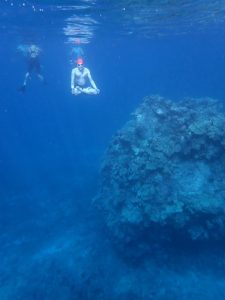 You don't have to sit only under the Bodhi tree. 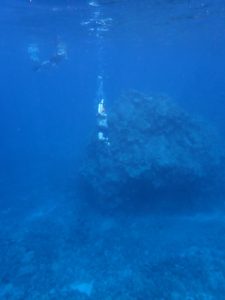 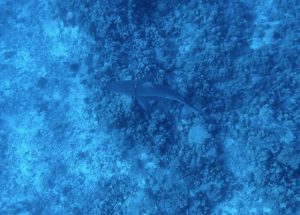 This poor shark (about 6.5 feet long) has an unwanted lei on. 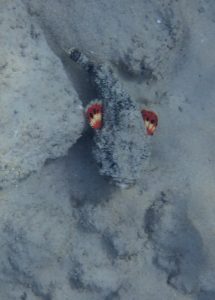 This scorpionfish flashed its bright pectoral fins at me to warn of its venom.

For various reasons, my friends couldn’t come at the start of the retreat, but they attended by Zoom so that they wouldn’t come in “cold” when they did arrive. Mornings there’s a lot of traffic noise. Evenings is a riot of coqui frogs and crickets, with not as much car traffic. They were convinced those chirping noises were birds. Nope, coquis. A coqui frog even hopped inside the house into the guest area. For those who could look, they were shocked to see that little one inch critter and know that it makes that shrill, loud whistle. And one morning on our drive in the dark to the temple, we saw piglets crossing the road. Since there wasn’t any traffic at 5:40AM, I paused and we counted TEN little piglets! Arggghhh!!! At least it wasn’t right by our house.

We managed to make a trip to see lava. The first night we intended to go, it was just pouring over here. I knew the weather could be very different at Saddle Road, but it was practically flooding over here. We ended up getting almost two inches of rain that night. So we went the next night. Traffic flow had improved greatly in a week (thank you, Hawai’i County). There were plenty of cones on the side of Daniel K. Inouye highway (new Saddle Rd.), so people were no longer pulling over willy-nilly on the shoulder of the 60 mph highway. Old Saddle Rd. was opened up as a one way lava viewing area. Drive on the left, park on the right. Old Saddle had been temporarily closed a day or two after opening because of an unexploded ordnance found nearby. That kind of news helps keep people from exploring too far from the viewing area.

On our way there, there was a time when there was a large stream of cars coming towards us, away from the eruption. I was thinking, “Uh oh. It’s probably pouring rain or foggy.” But we were going anyway. Conditions can change. As we drove along Old Saddle Rd., there was hardly anything to see because of thick clouds. For my friends, they’d never been to the area at all, and their first time was in the dark. There was almost a full moon, and luckily it wasn’t too cloudy on the north side of the highway, where Maunakea is. Since that volcano flank doesn’t have any settlements or lights on it, it was nice to see it by moonlight.

Eventually we saw a few Mauna Loa embers and some red glow. Cars were pulled over at various places, and we pulled over for a while to see if the weather would clear. Later as we continued along the road, we could see more embers, and a low wall of red on black, the part of the cooling, spreading flow that was about two miles away from the highway. The left lane for driving was practically at a standstill. Eventually I had my friends just ride in the truck bed since we were moving so slowly. Riding in the truck bed is a hit, I tell you. It’s not just for kids. They were surprised how much they enjoyed it, despite it being 50 degrees.

Since we were all the way out at Saddle, I drove up to the Onizuka Visitor Center on the Mauna Kea Access Road. From below, I could see there weren’t too many cars on the road, unlike the week before. We were so lucky that the thick clouds were rapidly moving, and we had some moments where we could see the red lava river coming down Mauna Loa’s flank. They could finally see a bit of what Mauna Loa looks like. It wasn’t just dark grey matter in the distance. The view appeared and disappeared several times. I haven’t studied how to use our digital SLR (single lens reflex) camera at night, so I didn’t even get any photos, plus the view was fleeting.

On another note, I just learned yesterday that a photo I took on November 29 with my iPhone has a special feature in it. I had shared the photo with a friend two days after I took it because she wanted to share a lava photo or two with friends. I hadn’t paid close attention to it, because I liked Hubby’s photos better. Do you see it? (Answer at the end of this post). I’ve even shared the photo with West Hawaii Today to see if they’ll publish it in the daily Island Life section.

On December 1, the volcano was spewing out SO2 emissions at 180,000 tonnes per day. It wasn’t too bad here in the central Kona area because most of the vog was blowing north to the other islands. Last week, though, was pretty voggy. We couldn’t see the horizon. At the end of the day the sun would just get absorbed into thick vog soup before it’d reach where the horizon should be. On December 10, SO2 emissions were at about 20,000 tonnes per day, a little over 10% of December 1. Some excerpts from this morning’s December 12, 9:35am report:

“The Northeast Rift Zone eruption of Mauna Loa may still be active at the fissure 3 (F3) vent but all 2022 lava flows appear to be inactive. “

“The significance of the continuing inflation while the flow field is inactive is not yet clear; it is common for eruptions to wax and wane or pause completely, but none of the eight recorded eruptions from Mauna Loa’s Northeast Rift Zone returned to high eruption rates after those rates decreased significantly.”

No more fountaining, and not nearly as much red to see. It seems this eruptive phase is wrapping up.

Changing subjects, during the time of our retreat was also National Pearl Harbor Remembrance Day on December 7 to remember and honor the 2,403 Americans who were killed in the Japanese surprise attack on Pearl Harbor on December 7, 1941. The U.S. declared war on Japan the next day and thus entered World War II. I recently finished reading Facing the Mountain: A True Story of Japanese American Heroes in World War II by Daniel James Brown, the author of The Boys in the Boat. I highly recommend that book.

I’ll close on a lighter note with photos of local flavor this Kekemapa and Kalikimaka (Christmas) time. The lighted boat parade was a bit light on boats. I don’t think there was much notice that it was going to happen. The events are still slow to return from COVID hibernation, and sometimes they’re decided to be on, with little notice. Still no Jingle Bell Beach Run. 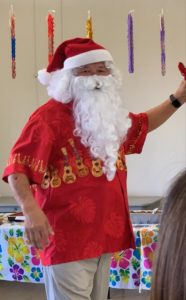 Welcome aboard the Body Glove 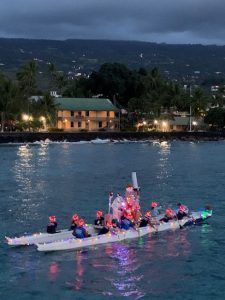 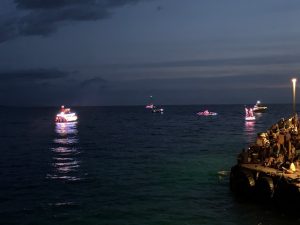 In case you didn’t see the image in the lava photo, there’s a white dragon head on the right side belching fire.

2 thoughts on “Kekemapa on the cushion, volcano, and sea”