A Ho’olaule’a is a celebration or festival. For the 10-day coffee festival, it usually happens on the last weekend. This year I was recruited to help at the ti leaf lei making station, which Reiko has been volunteering to run for double-digit years. My creds are that I’m Reiko’s friend, and my English is better than hers. I only made my first ti leaf lei a few weeks ago, and it wasn’t too pretty. But it gave me empathy for what the newbies might be confused about or feeling.

I didn’t really know what to expect. I’ve been to the Ho’olaule’a in years past, but I never stopped at that station or paid attention (sorry, Reiko). Well, we were busy from the start, and it pretty much never let up. We were so busy, I snapped a few photos early on, and then never again. For one thing, my fingers were always a little goopy with ti leaf juice, so I didn’t want to touch my phone. We had help from one of Reiko’s friends who helped the entire time except when she performed with the taishogoto (Japanese stringed instrument) group.

I was a bit surprised how much I enjoyed being there the entire time (the event was 9am-3pm). I liked having a role that kept me busy without being stressed-out-busy. I could hear/see all the multicultural performances by being there the whole time — petite Tahitian dancer, Scottish dancers in kilts, Mexican folk dancers with the big skirts, hula, Japanese instrumental songs, taiko drummers, etc. Every once in a while Reiko or her friend would pop up and start dancing hula right at our station when they’d hear a song they know and love.

I saw many people I know from the various things I’m involved with. And Reiko knows an impressive number of people, so I was introduced to many culturally influential people. It’s a casual event where people come and go all day long. I like that locals and tourists come to events, and that the town doesn’t get consumed by or overrun with the coffee festival like it does with Ironman.

Ti leaf leis symbolize positive blessings, protection, and good luck. Yet, ti leaves aren’t scarce items; they are very common and abundant. A hula kahiko (ancient-style) dancer will often be adorned with ti leaf leis (of a more elaborate style than we were teaching) on his/her ankles, wrists, head, and neck and a ti leaf skirt. Ti leis are worn by both men and women. It has no scent and thus are good for people with allergies.

The people who tried their hands (and a toe, for most) at lei making were all very appreciative, which was gratifying. The lei is made completely of ti leaves. Not even string or a needle is required. Some people were twisting their leaves so tightly, green juice was dripping out. They were wringing out the juice. I reassured them that when you make your first lei, you’re learning the process and the materials. It doesn’t have to be perfect. Try things, learn things. Once you know how to make the lei, you put in some effort, and you can create something to give someone.

Like most (all?) of the cultural stands and the performers, we volunteered our time, and there was no charge to attend or participate. The ho’olaule’a is heavy with that aloha vibe.

Beforehand Reiko had made a lei po’o (head) out of all ti leaves, some green and some yellow. It looked impressive. She put it on her head but soon took it off because it made her hot. So I wore it, along with a ti lei I had made a few days prior. So, of the three of us working the station, I looked like I was the kumu (teacher), but I barely knew what I was doing. But I was surprised how many people I was able to teach. You only have to know more than the ones who want to learn and be encouraging.

I hadn’t considered it ahead of time, but it was an opportunity for me to just hang out with my two kumu. When they weren’t actively teaching people, they’d just make leis and fancier ti leis and adornments, to show people what’s possible. So I could observe and try other techniques when I had down time. Down time rarely lasted. When you’re doing something, people come and watch, and then they want to try, and you have new students again. 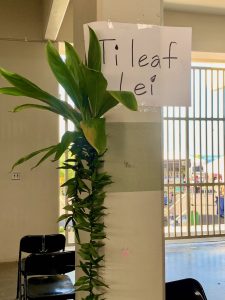 Ti, not tea, leaves. The top cluster was simply cut off a plant, so people know what leaves. The lei shown is more advanced than what we were teaching. 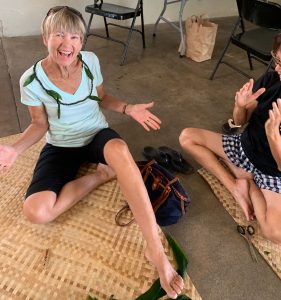 Our first student was so exuberant, pleased and thankful to have learned how to make the lei. 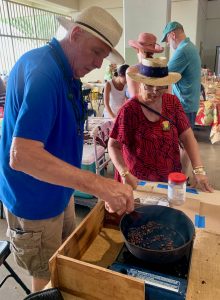 Next to our station was the coffee roasting stand. It smelled delicious when he gave demos. (I made him that lei he's wearing).

Daifukuji taiko drummers. I like to feel the airwaves the drums stir up.

There was great attendance of the event. There were many more vendors outside the pavilion, too. 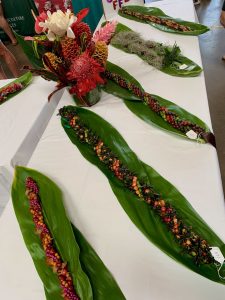 There was a lei contest. This shows some in the coffee lei category, which must be made from only the parts of the coffee tree. Can include blossoms, beans, leaves, etc. 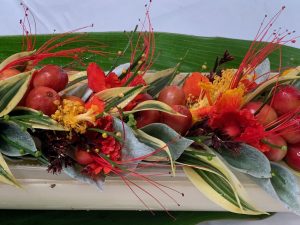 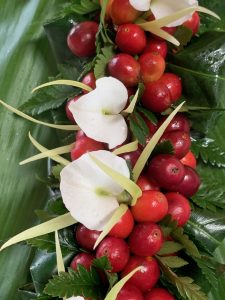 Reiko had to leave early because she had made plans to go to Volcano. She took the lei po’o off my head so she could offer that and other leis to Pele, the Volcano Goddess.

That’s a good transition for the last topic for today’s post … Mauna Loa. The previous weekend, a few hours before the event, I learned that the County of Hawaii Civil Defense was giving a community talk at Konawaena Elementary School about potential Mauna Loa eruptions. I don’t know why something so important wasn’t better publicized. I had read that Ocean View seemed to be caught off guard when the talk in their area was held, too. I’m surprised the Civil Defense didn’t announce it in the local paper’s events section. Many things are mysterious to me.

It’s a good thing that talks are being held, because we have to be mentally and practically prepared for the eventuality of an eruption. To be clear, Mauna Loa is not erupting or imminently about to erupt, despite the impression the mainland media was giving.

Hubby went to the talk while I was at the Donkey Mill Arts Center learning crafts. He learned about this USGS map titled, “Mauna Loa eruption response times.” We’re in Honalo, the northern part of that red “South Kona” box (but technically we’re in the southern part of the North Kona District). That blue line there indicates the border where the Mauna Loa and the Hualālai slopes are. We are located just north of that line, on the east/mauka (mountain) road north of that intersection. We were surprised to realize just how close we are to the Mauna Loa slope.

My aunty said the last time Mauna Loa erupted, the lava reached the ocean pretty quickly. Her father was fishing in South Kona and got cut off from returning home. He had to drive south, get gas at Na’alehu (the southernmost town in the U.S.), so that he could drive completely around the island to return home.

Apparently dynamite and bombs have been used in the past, or seriously considered, to divert lava flows. I found this New York Times article from 2020 about this topic, “The Army Bombed a Hawaiian Lava Flow. It Didn’t Work.” I know you all might not be able to read that, but you can search on diverting lava flows by bombing. It’ll bring up some interesting pieces.

We wonder if we’ll see Mauna Loa erupt in our lifetimes. And what will its impact be? On this island, you always have situations where you’re made aware that you, personally and humankind in general, only control so much. And there’s strong sentiment for letting Nature take its course, as Madame Pele wills.