Today’s Hawaiian word of the day: imua. To go or move forward, with strength, purpose, and spirit. The 10-day Kona Coffee Cultural Festival, unleashed from COVID, started Friday, and it has been more fun than I expected. It was a bit dreary and drizzly up in the coffee belt, and inertia was pulling hard. I wanted to go to the evening’s Lantern Parade, but I didn’t want to deal with parking, maybe it was going to rain, excuses excuses.

But we got our ‘ōkoles (butts) in gear and went. We even marched IN the parade. That contributed to inertia since we had to be there one hour before the parade. I definitely thought of my cousin, who was a grand marshal in the Fourth of July parade. But unlike her, we weren’t in a position of honor, just taking part.

It was fun! We marched with Daifukuji, meaning The Temple of Great Happiness, in Honalo, less than a mile away from our farm. Most of our group were the taiko youth drummers and their parents/supporters. It is fantastic to march with the drummers. It’s uplifting, exciting energy, and you could feel the spectators’ enthusiasm as we went by. (Unfortunately, my little video from the start doesn’t capture the best). The parade route was really short, what we usually walk if we go to breakfast after swimming at the Kailua pier. One and a half hour wait; 10-15 minute walk.

Hubby and I ate dinner near the parade end, then went into Hale Halawai to watch the entertainment. Each group seemed to get 15-20 minutes, so it just kept moving along. We walked in when a different group of taiko drummers were playing bon dance songs. What I really love about bon dances is that people of all ages just jump in and dance along. Some of the Daifukuji taiko drummers were dancing, seniors, the beauty queens wearing their crowns, young children, etc. Some of the songs are more classical Japanese bon dance songs, and some are more modern like Bruno Mars (he’s from Hawai’i; my grand marshal cousin was his kindergarten teacher).

One of the local high schools, Kealakehe, has a large Polynesian club. They were injecting a lot of energy before, during, and after the parade. Every time I see them perform, I am so impressed. Just watching them all, maybe 100?, file in already impressed me. I like that they don’t have flashy, matchy-matchy outfits. They have the black club t-shirt, and everyone has a pareo (sarong) on. This little video clip is just the first bit they did after filing in, before their real performance. The speed, energy, preciseness with that amount of students. Whoa!! I suspect I’ll be seeing them perform again on the weekend at the Ho’olaule’a, when I’ll be volunteering at the ti leaf lei making stand. (I feel very unconfident, but Reiko says I don’t have to worry, I can just do crowd control and my English is better than hers. Ha ha!)

That was just Friday evening. Saturday morning, I packed a lot in. It was the Holualoa Coffee and Art Stroll, where you can taste different vendors’ coffee, look at art, and visit the various vendors with food and goods. As soon as we arrived, we got a friendly shout from across the road, “How were the grapefruits?” It was the lady we met at dinner the night before who had a big bag of limes and Ruby Red grapefruits she was handing out to any customer or employee who’d take them. Those of us with fruit trees are familiar with the “problem.” Don’t want good fruit to go to waste.

I’ve noticed the coffee vendors are becoming more sophisticated. There were more making fresh pourover coffee into their pump pots (vs. just making a big machine-brewed batch ahead of time). Some of the different tastings were of different processes (honey processed vs. washed), beyond just medium or dark roast. I appreciated one farm that had an informational poster with the location of their farm, their elevation, how they process, the types of trees they have, etc. I did hear a few vendors who said they didn’t have any coffee to sell, on-hand or online, because of this year’s extremely low harvest. They had saved some coffee to have available for this tasting event, but they didn’t have any more.

We only had a measly half hour to briskly walk through, no stroll, for us. I had signed up for two classes at the Donkey Mill Art Center, part of the cultural events in the Kona Coffee *Cultural* Festival. One was ‘olena (turmeric) dyeing a Japanese hand towel. The other was for making a lei po’o (head). I’ll let the photo gallery explain.

The one coffee and food vendor at Donkey Mill was also pretty sophisticated. For food, he had four or five different types of musubi that he and his wife had made. For coffee, he made it to order and had his Fellow kettle, Fellow grinder, and Hario pourover kit. Kona coffee is not Folgers and needs to be properly showcased. That coffee vendor is also almost sold out of coffee beans for the year. (NPR aired an interesting piece the other day, “Folgers, a throwback brand in the age of nitro lattes, wants to be cool.“) I’ve shared it before; Grandpa used to drink Folgers, not Kona coffee (too expensive). 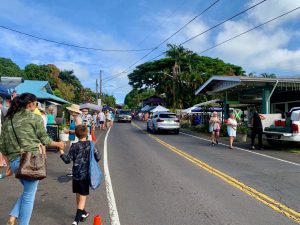 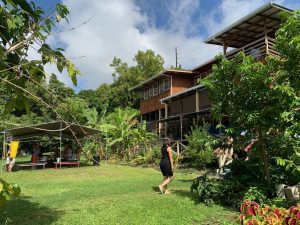 Donkey Mill Art Center. Note the coffee tree on the left with a few cherries and raisins. The 'olena dyeing class took place on the lawn under the tarp. 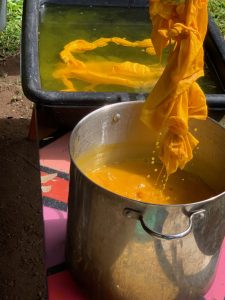 My tenugui (hand towel) after an hour of soaking in turmeric ('olena). 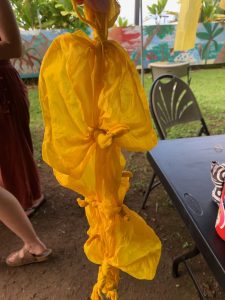 I tried different techniques with string and rubber bands. 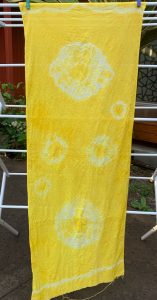 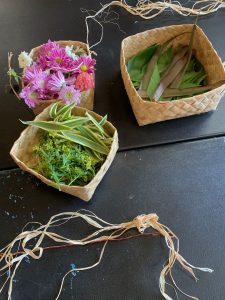 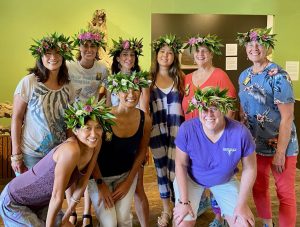 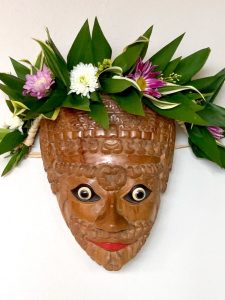 My lei po'o on our Indonesian mask. I saw one person the next day using hers as a hat band. 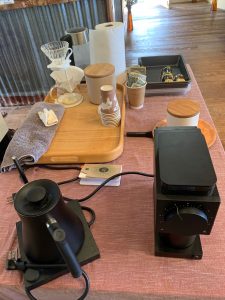 The coffee and musubi vendor, shortly before closing up for the day.