I did it! I tried a recipe new to me that I had been wanting to try for months. My favorite local bakery, Sundog Bread, occasionally has new pastries. One time it was bostock. I suspect they offered it a few times, but I only saw it offered once. Have you ever heard of that? I had never heard of it. I think it’s another French invention to use stale bread. It was delicious, and I thought I’d look up how to make it.

Last post I brought up the motivation and execution issue. So I reflected on why and how I got over the inertial hump of trying a new recipe. I did take some initial action; I found a recipe I wanted to try. Bonus: it’s a little fancy, but supposedly you can bake it, refrigerate it, and just reheat to serve.

I needed a few ingredients, so I put them on my shopping list. We don’t have a lot of grocery stores, and I don’t find inventory rock solid reliable. It took me a while to find sliced almonds, believe it or not. I wanted to use Japanese milk bread, which I could order from Sundog close to when I wanted to make it. Brioche, challah, or Hawaiian/Portuguese sweet bread would also be good. I find Hawaiian sweet bread to be too airy and delicate, though. And I needed an orange, another item I could get close to when I would bake.

Now I just needed to set my mind to it. But I didn’t need to make this. I was curious, that’s all. I couldn’t quite resolve to execute. I required more serendipity.

There’s a bakery in Waimea, an hour drive away, famous for Japanese-style pastries made by a Japanese-born pastry chef. I heard stories how there would be a long line even before they opened, and they’d sell out of their delicate desserts. I’m not sure if that’s still true.

It’s fairly rural on this island. Hubby had to go all the way to Waimea to see a particular doctor one morning, so I told him to make a side trip to Patisserie Nanako and get whatever looked good. He delivered. He brought home a few divine desserts and a loaf of Japanese milk bread. The milk bread surprised me, but fine. I saved the last five slices in the freezer, intending to use them for the eventual bostock experiment.

Now all I needed was an orange. One ingredient. That’s doable. The final impetus was rain. It has been raining a bit more frequently lately. And recently it has been occasionally starting early, one morning it was 6:30am, which is unusual. Our rain usually starts in the late afternoon or evening. Grey, dreary, rainy days lend themselves to baking. It’s a warm, comforting activity that envelops you in a delicious aroma.

This is the bostock recipe I found that looked the most appealing to me. I have it written out at the end of the post, in case the link eventually disappears. It was based on Tartine’s cookbook, and Tartine has great credentials. It came out pretty nicely. The recipe is a keeper and tweaker.

When I first try a recipe for a new food item, I try to stick pretty close to it. And then I might experiment after I have a little experience with how it turns out. I want to tweak it with some Hawaiian twists. I used Hawai’i island butter from Lalamilo, and I substituted ‘ohelo berry for boysenberry jam. I had the butter that I had bought from Adaptations CSA (community supported agriculture) in the freezer. That dairy used to (still does?) supply the cream that Tropical Dreams ice cream uses. I can’t find that butter anymore. I think I’ll try substituting mac nuts for almonds. And I want to use a calamondin marmalade instead of boysenberry jam.

[Aside: ‘ohelo berries are related to blueberries and cranberries. They are tart. But I really like tart/sweet fruits in jams and marmalades. ‘Ohelo are a favorite snack of the Hawaiian goose, the nēnē. The nēnē is listed as endangered by Hawai’i state, but has threatened status federally (downlisted from endangered). ‘Ohelo are considered sacred to Pele, the volcano goddess. I can’t particularly recommend the ‘ohelo jam I did use; not enough ‘ohelo.]

Bostock is a great pastry with coffee. I enjoyed it with some dark roast peaberry in my current favorite mug, a coffee plant inlay by local artist Claire Seastone. I saw that design on an artist show flyer, and I coveted one for many months. I contacted her months before hubby’s birthday last year to ensure I could get a couple. She doesn’t often have them. She says it’s a lot of work to make, yet she still enjoys making them sometimes. She always sells out of the design.

As far as leftovers … we did try refrigerating the leftover bostock and reheating. It refreshed nicely by sticking it about six inches under the broiler on the low setting, for about three minutes. 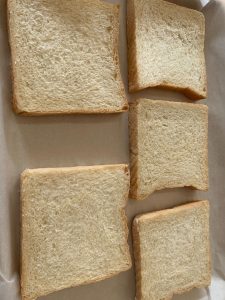 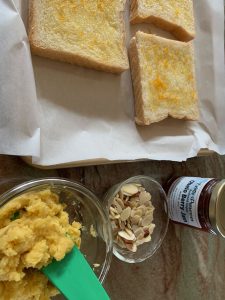 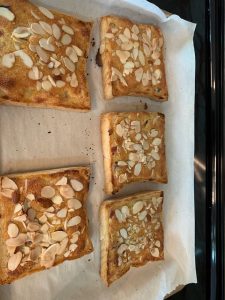 Enjoyed with a cup of dark roast peaberry in a Claire Seastone mug. 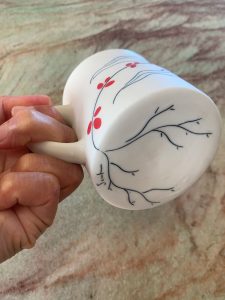 The design continues on to the bottom of the mug.

Start making the almond cream first since it needs to be refrigerated for at least an hour, or it can keep in the fridge for up to a week.

One thought on “Heard of bostock? It goes well with coffee …”