just like a fine wine. Let the journey begin!”

I found that quote, but I can’t find whom to credit.

We are roasting peaberry today. Peaberry is our 5%. Mutant coffee. But it’s all natural mutant coffee! Normally coffee fruit has two seeds with flat sides that abut, like a football sawed in half vertically. But in about 5% of the fruit, you get the whole football. That football is denser than the two half-footballs, so it roasts and tastes differently than usual coffee. When you look at the red cherry fruit, you can’t tell if you have a football or a halved-football inside. So the mutant coffee seed football peaberries are revealed during dry milling, when the coffee parchment is milled and graded.

If you’re on our mailing list, you should have received an invitation to order roasted peaberry. We don’t have much, and we tend to offer it during the holiday season and sometime April-June.

One of our customers, when prompted about peaberry, orders his green (regular) coffee which he roasts himself. Another customer ordered green (regular) coffee in addition to roasted peaberry. I’m always curious about any of our customers that roast their own coffee. I like to see photos, hear stories, etc. I thought maybe the customer who newly ordered green beans got a new roaster or was going to borrow one. He wants to roast for the experience, and he plans to use a popcorn maker.

The long-time coffee roaster, whose wife is from Eritrea, had earlier generously shared his experience:

Here in the U.S. they first roasted the beans in a pan on the stove, as they’d do in Eritrea. Then they used a popcorn machine, which had better results in terms of uniformity. But soon it broke from the weekly use. Finally they bought a good roasting machine, which had been working well for more than 10 years, at the point I asked. They buy five-pound bags of green beans, and they roast maybe 250 g or so for the week. When the mom visits from Eritrea she roasts the beans in a little pan to have the smell in the room, before she serves the actual coffee.

I asked for an update on his roasting and/or tips for a newbie, and he shared that he’s still using that same roaster. He did have to replace the heating element last year. It was nice that the part could still be ordered without any problems well over ten years later.

As for tips, he said to keep an eye on the roasting process in case a fire develops. After their popcorn maker died they first bought a cheap roaster which died after a while. During its last run it developed thick smoke. The reason for this was that the roaster used a plastic wheel to drive an auger that loosened the beans so that hot air could be circulated through them. The plastic wheel deformed through thermal stress over time. Finally, the auger did not loosen the beans anymore, the hot air did not sufficiently circulate through the beans, and the heating element overheated. The wire insulation for the heating element started to go up in smoke. Such a thing has never happened with their subsequent and current  “good” roaster. It also has thermal sensors for protection and is generally much better built.

(Does it surprise you that he has a PhD in Electrical Engineering?)

He has the Gene Cafe Home Roaster. The new version of the roaster has a mechanism, where one has to push a button half way through the roasting to ensure that one watches the machine. If the button is not pressed the machine aborts the roasting process.

Here are some links for roasting coffee at home, in case you’re interested:

Sweet Maria’s is a great source of info.

The beanpoet’s “Best Home Coffee Roaster“. (They are an Amazon Affiliate, so there are a lot of embedded ads, which I find annoying)

And because no post would be complete without ’em, photos taken at dusk on Memorial Day … 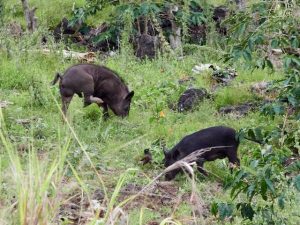 Two pigs and a mynah bird. Earlier the mynah was riding the rear of the pig on the right. 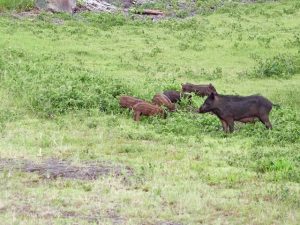 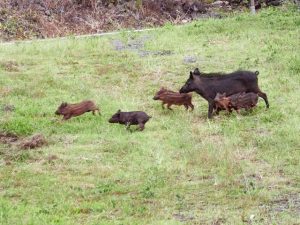 Mama and 5 piglets on the run

One thought on ““Good coffee takes time to roast, …””