I have been using the USDA’s weather station at Kainaliu, a mile away, as an indicator for our rain situation. However, that station reported only 0.37 inch in February (in comparison to 3.7″ in February 2021), and I was fairly certain we received more than that. There were a few days we received medium to heavy rain, and Kainaliu measured no rain or 0.04″ on those days.

So, I bought an inexpensive new toy … a simple rain gauge, a plastic container you stick in the dirt that collects water. You note the reading, and you can then empty it for the next day’s reading. I had it in time for the recent rain we’ve finally been receiving. On the first day, I measured 0.125″, and Kainaliu received 1.1″. I believe it, because we ate dinner a little south of there, and didn’t sit by the large open area because it was raining too hard. As soon as we left and headed north just a driveway or two, the rain lightened up, until the point that we returned home to no falling rain.

The following three days, our rain levels pretty much matched up with Kainaliu’s. For me, it’s just interesting to know and quantify.

So, with little rain in February, that means no/few coffee flowers. By mid-March we usually have had four or five flowering rounds. We’ve had the one big one in December and no real additional round, just a few trees with a few blossoms every once in a while. It is going to be an outlier year, that’s for sure.

And with the pigs, it’s a cycle. It’s dry, the pigs damage a plant looking for tender roots or other moist goodies, we replant the uprooted plant, water it because it’s stressed and it’s dry, then the pigs return the next night. Hubby continues with daily pig damage control and bandaid pig-proofing. His approach is to protect the bark of the trunks and to prevent the pigs from ripping off entire branch nodes. We’re accepting some damage, just trying to prevent total destruction. He tries something out, it seems the pigs immediately give it a go, then he fine-tunes his contraptions.

Lately, the pigs are enjoying destroying our red ti plants, after they had left them in peace for months. Well, these pigs are probably different than the pigs of last year. We think our three pigateers are youngsters from the seven little piglets we saw in January, and they seem to have discovered the joy of pineapple and ti plants. Most of our pineapple are now in pots in our protected courtyard, and the pigs uprooted all other pineapples that had been in the ground. We mostly see them at night or by nighttime camera recordings, but we’ve started to see them even mid-day. They are also trying very hard to get into our Earth Machine home composter we use for kitchen scraps. Humans are still winning, but the pigs are gaining ground.

A friend shared this CBS news story about other “wild herbivores in the night.” I thought it was going to be about feral pigs, but it’s something much larger … 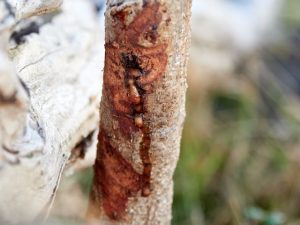 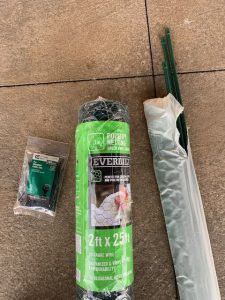 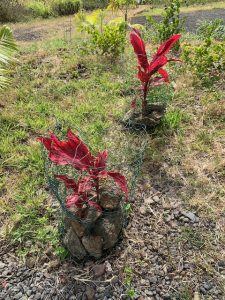 These were the first to be protected with cages since they still had leaves. 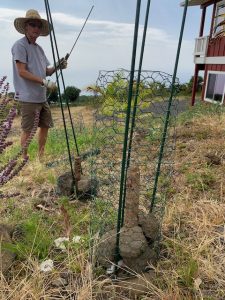 These red ti already had all their leaves ripped off. 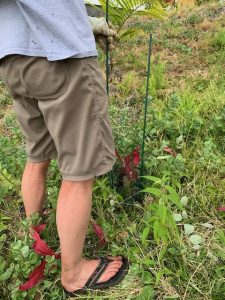