Most of my recent posts have all been about peripheral topics — visiting family and friends, bananas, and pigs. Last season’s harvest was over, and we were getting into the new year. In December we had decent rain and a big farm-wide blossoming. January revealed the trees recovering from the October/November dry spell (November’s rain was 8% of an average November), and all our pig-damaged new trees were growing back. And here we are … at the end of February already.

Last week hubby and I went to our first in-person (since the pandemic started) coffee education workshop at the nearby University of Hawaii’s CTAHR extension office. They offer regular informative, relevant coffee-related workshops, which we’ve gone to in the past. We attended one pandemic workshop offered on Zoom shortly after coffee leaf rust (CLR) rapidly appeared in the islands during the pandemic. Last week’s workshop was about rust, what has been learned over the year-plus that it’s been here, and was offered in-person and on Zoom.

Of course, there were some technical glitches (slides weren’t advancing for the remote people), but it wasn’t disruptive. There were only about ten of us there in person and many more attending virtually. You pick up so much more from an in-person event. You could feel the moments when the information and guidelines felt overwhelming and burdensome to the farmers. And there are frustrations — systemics and herbicides used against coffee leaf rust that are allowed in other countries aren’t allowed here. Sprays that are allowed here on vegetables and edibles, still have to be explicitly approved for use on coffee, and that process is slow.

There were more mumblings in the audience, it got louder, there’d be side discussions and grumblings, and they seemed on the verge of heckling the presenter. I’ve seen this dynamic happen at coffee berry borer (CBB) workshops. What they ideally recommend you do seems impossible. I truly admire Andrea Kawabata for her ability to convey information, acknowledge the deep discouragement people might feel, yet still encourage us to do what we can, and to give us some hope that feels realistic.

They are now recommending block pruning farms. Because of our terrain and the way our trees were initially planted by my grandfather, we have already been stumping in blocks (vs. row by row). So the same technique to manage beetle can be used to manage rust. It’s just that more steps have to be taken to manage rust spores. It’s quite a program, which I won’t go into here. The stumping was helping control our level of beetle infestation. And the care the trees were receiving was improving our yield, despite losing 1/3 of our trees to stumping every year. But beetle only damaged the fruit in a season, not the tree’s life. Rust can cause leaf drop, which can cause the tree to die.

I had been hopeful after December’s rain and flowering and a new calendar year starting. But now over a third of our trees are stumped. There will be no fruit from those trees. None of the remaining trees look absolutely healthy with lots of rust-free leaves and fruit developing. Most of the trees that were stumped in 2020, which should be our big producers this year, didn’t set much fruit from that big December flowering. We hardly got any new flowering from the rain we got in January or February, probably because the trees are too stressed. The best looking trees with fruit seem to be from the ones stumped last year. One tree, despite not having a lot of leaves, can have fruit, but its neighbor might not have any fruit. At the moment, I’d be surprised if we get even half the cherry we got from our lowest yielding season. 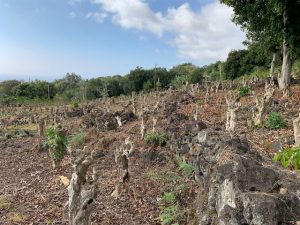 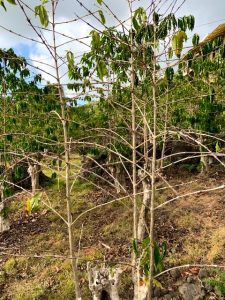 Spindly verticals that lost leaves, the leaves it does have are droopy, and no fruit set. 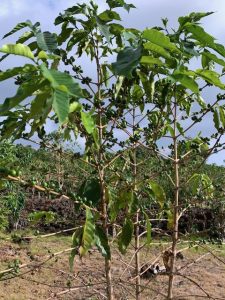 One of the best producing trees this year 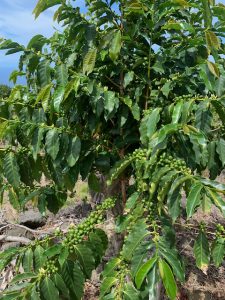 The pigs have been here nightly for a few weeks now. We were surprised because they hadn’t been particularly destructive. But they’re resuming their antics. Maybe because it’s getting fairly dry again. They’re digging up big rocks to rummage for the moist things underneath. They’re eating and knocking off the ti plant cuttings of the few they had earlier left alone. They’re revisiting the young coffee trees they already butchered and eating the new young growth. I don’t think young trees that get repeatedly attacked will thrive or necessarily survive. In hindsight, planting new coffee trees feels like it was money and effort down the rusty pig drain.

On another note, the ‘ulu co-op next to us will be removing their big weed trees. They’ve even hired people to help. This weekend was a big effort. It always is an adjustment when big trees are removed. The owner up hill from us, Kona Castle Ranch, removed many weed trees and seeded grass. We’re now accustomed to that change in landscape. We’ll have to get used to seeing the ‘ulu co-op, but they and we will probably plant something on the boundary.

We fantasize about removing the coffee, getting heavy equipment to level out the terrain, plant tough grass that keeps weeds out, and just mow the grass with a seated mower like our neighbor above does. Our friend, whose parents grow wine grapes in CA, reassures me that every farmer has the dream of plowing it all under.