What’s amusing is that we’re featured on PATH’s (People for Active Transportation Hawai’i) blog today, one of two couples who volunteer there. The little heart framed photos look so Valentine cutesy.

Since I wasn’t busy smelling my flowers or eating chocolate bonbons, I was dehydrating bananas. I’m willing to bet you were not doing the same.

Our visiting friend harvested a big bunch over a week ago. It was the perfect time, given that the whole cluster completely ripened all at once. That’s rare. We had cut off several hands and gave them away on Saturday, but we saved the rest to cut yesterday to give away. When I went down to get them, over half of them had dropped off from their hanging area, tearing their skins. And the ones that were still hanging were all torn. That’s never happened to us before. So I had a box of single bananas with slightly torn peels.

Everybody always says to make banana bread, but banana bread doesn’t use enough bananas. I made one bread (using 6 bananas) and dehydrated the rest. I cut each banana into 2-3 vertical slices. 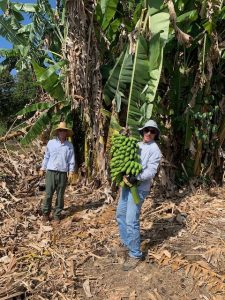 Our friend cradles his harvested bananas on February 2. 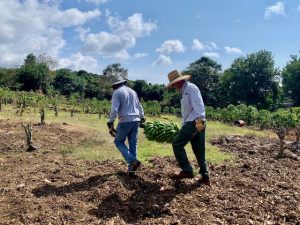 Carrying the harvest up to the house. 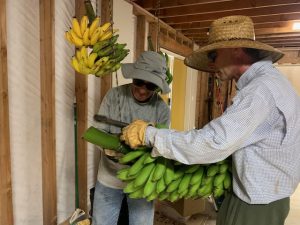 A big addition to the hanging collection. 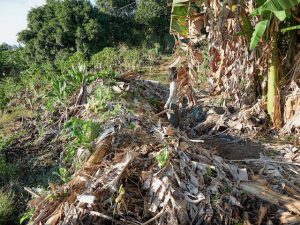 The compost pile below the bananas in December. Depressingly, things are growing out of it. 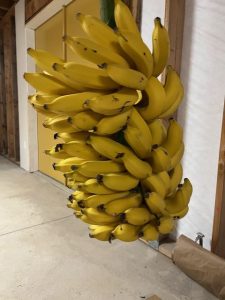 The bananas all ripened at once, which is rare. Febr. 12. 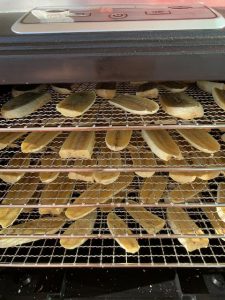 Banana slices in the dehydrator. 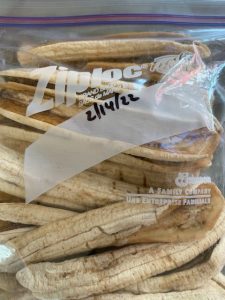 On the coffee front, I’m expecting a little flowering next week from a few consecutive days of rain we received. Weeds are back, but not yet in full force. I’m curious if we’ll get as much rain this year as we did last year. If the volcano continues erupting, I doubt it. Since the big flowering event in mid-December, there hasn’t been any flowering other than an occasional few. The lowest block of trees should be stumped next week.

2 thoughts on “Valentine, I’m bananas about you!”