Bea safely returned home. She arrived a bit before midnight, and already the next morning she ran two miles at 5:30AM (that’s 3:30AM Hawaii time!), like she usually does every morning she doesn’t hike. I think she was eager to return to her usual routines, but I didn’t expect her to start back that quickly.

While she was here, I tried to make outings to places with interesting plants. Two places we visited were Paleaku Gardens Peace Sanctuary in Captain Cook, not too far from the Painted Church, and Doutor Coffee Mauka Meadows.

Paleaku has a laminated sheet so you can take a self-guided tour. (It’s the same as this one available online). It’s geared towards the variety of shrines they have that represent the world’s major religions. If you aren’t a plant person, the tendency is to hit the numbers on the sheet and to simply enjoy the fabulous view. Galaxy Garden, check. Ikaika Wahine, check. Buddhist shrine, check. Labyrinth, check. You might completely miss the wealth of interesting plant varieties on the grounds. Many aren’t labeled. I had been looking forward to walking there with my mom and learning. It’s a fun place to visit at different times of the year to see what’s in season or blossoming. I see new things every visit.

For example, now the mgambo tree (AKA, Hawaiian pussy willow, velvet seed tree, among its many names) is popping for me, there and many other places. What were “just” green-leaved trees, are now calling out to be noticed. From a 2016 article in West Hawaii Today, “The mgambo produces panicles with dense clusters of tiny light green, fragrant flowers that develop into three-lobed seed capsules. When the fruit splits open, the plant becomes a show piece. The pod reveals a bright red interior where round dark grey velvety seeds are nestled.”

There were blue jade vine flower clusters that look other-worldly, pods on the cacao trees, and a plethora of fruiting and flowering trees and plants. I enjoy seeing and admiring how they prune huge trees like mangoes. Uncle Harold has planted many mango trees on a modestly-sized lot. He weighs young branches with cans full of rocks hanging from wires, to strengthen the branches and to encourage them to grow more horizontally. His philosophy is that no mango tree should grow higher than the roof of their house. His other technique is to talk to his plants/trees.

We think he needs these “sausage” fruits from the sausage tree to weigh down his mango branches. The fruit are surprisingly heavy. The stems supporting them are super strong.

The other location we were fortunate to visit was Doutor coffee farm, thanks to our friend Reiko. I gather Doutor company might be like a Japanese Starbucks. Gotta love this Japanese English on their home page: “We provide with peace and energy to people through a cup of delicious coffee.”

Doutor Mauka Meadows primarily caters to Japanese tourists. There’s even a Yelp entry for this spot, but no company has claimed it. Can you imagine Starbucks not claiming their Yelp page? Japanese COVID policies are so strict for their citizens returning, it has basically killed Japanese tourism here. So right now Doutor’s tours aren’t offered.

Reiko, born and raised in Japan, seems to know everyone here, especially if they’re Japanese. I could write a post on her alone. She has called Hawaii home for about 25 years. She’s very interested in Hawaiian culture, dances hula, plays ukulele, makes Hawaiian crafts, swims and takes underwater photos each swim, etc. She’s great for bridging Japanese, Hawaiian, and American culture. She often knows the name of a plant or fish in all three languages and maybe the scientific name, too. She’s also very thoughtful and generous, including with her time and knowledge. I often start with her when I want to identify something, and then I research more from there.

Since the pandemic started, she started daily blogging at https://konahawaii.hatenablog.com/. It’s in Japanese, so I use the Chrome web browser and Google’s translate capabilities. I follow it because she takes great photos (many of her photos have been featured in West Hawaii Today’s “Island Life,” on page 2), and I’m just interested in the variety of things she writes about. A Japanese-fluent friend said it’s a bit stream of consciousness.

I think a lot gets lost in translation. For example, I think many pronouns like “he” or “she” become “I.” Once I thought SHE had sat next to someone at Christmas who turned out to have COVID, but it was another friend she was referring to. She gives names to some of the characters she refers to. Like “Uncle Octopus” for the kupuna (senior) who knows how to find octopus. I think she sometimes refers to me as what gets translated to “bikini unnie” (I wear a 2-piece when I swim). I had asked her what a “unnie” is, and apparently she means “wahine” (woman), but Google Translate doesn’t quite get it. (From Googling, it appears that unnie might be a Korean expression used like “auntie” in the Hawaiian culture.)

In any case, Reiko knows the gardener/caretaker at Doutor, so we were able to tour the grounds. The few signs are mostly in Japanese. I could tell there were many interesting varieties of, e.g., citrus, but they weren’t labeled. There were cherimoya, jaboticaba, loquat, all-spice, and many other fruit trees. None of those were labeled. Generously, they allowed us to pick fruit for our consumption (no commercial harvesting). Reiko also found a large palm frond she wanted for a craft project. I had no clue what she was going to do with it.

Part of the property we toured had coffee trees. The sign said 10,000 trees over 17 acres. The majority of their Kona coffee is grown on other nearby properties. Some of the coffee trees had labels. Apparently, some trees were labeled to honor some accomplishment of various specific Japanese Doutor cafes. And some trees were sponsored by individuals or groups. You can pay some, assumedly high, fee, and that tree is then under your sponsorship. It reminded me of Masumoto Farms in California, where you can adopt a peach or nectarine tree. Unlike Masumoto, your tree’s fruit aren’t yours for that season. Making trees available for sponsorship might be a way for small scale farming to be financially viable. So, I found the marketing interesting.

I also noticed that they had stumped several of the coffee trees like we do. But it seemed a bit random, not by row, or block, or every 3rd or 4th tree. The coffee caretakers weren’t on hand, so no one could answer questions. Maybe they were demonstrating stumping to others or practicing the technique, or they stumped some trees with a lot of beetle or rust. 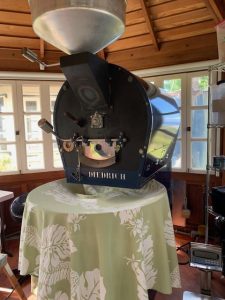 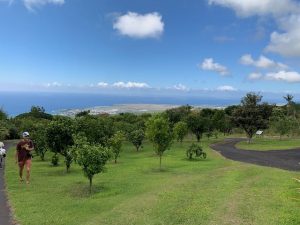 Citrus trees and a view of Kailua-Kona 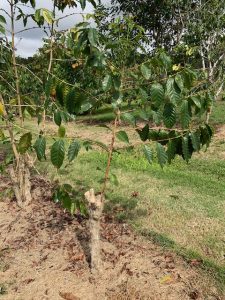 This stumped tree has a "nurse" vertical to reduce tree shock and losses from stumping. The nurse vertical can be removed after new shoots emerge. 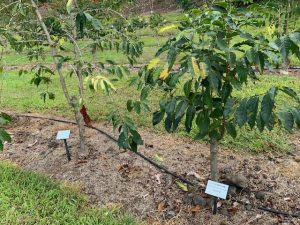 The tree on the left is sponsored by two individuals. The one on the right honor's a particular Doutor Japanese cafe for its accomplishment. 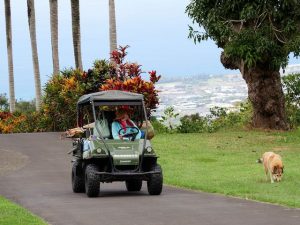 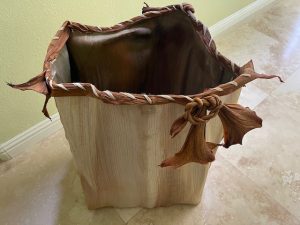 If you ever get a chance to tour Doutor Mauka Meadows, check it out.

As for Reiko’s project, she had to cut that frond to a size that would fit in her bath tub. She had to soak it two days before she continued. What creative vision and dedication. I found a website that makes other craft works similar to what Reiko made: https://www.hawaiianpalmbaskets.com/