Snow on top Maunakea and Mauna Loa, and Kona snow on the coffee farms.

November’s rain in Kainaliu at 0.25 inches was a measly 8% of an average November rainfall. The majority of that came at the very end of November. (Last year in November we got seven inches of rain.) Then it rained 1.5 weeks ago during the summit blizzard warning. It rained almost four inches over four days or so, which isn’t that much for our area. Prolonged dry period, then rain. Now we have Kona snow! 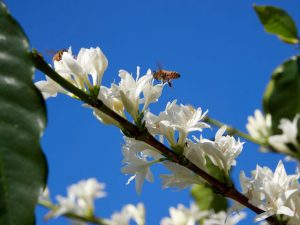 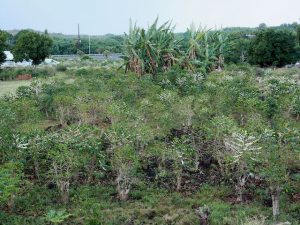 We have a large amount of blossoming. We think it looks larger than the largest blossoming round all of last year. And it has come so early. That means mid-July picking. Usually the first round of a new season is light. I’m curious what the rest of the blossoming rounds will be like … somehow I think they’ll all be smaller. I’m a little anxious to see what effect the rust will have as we go through an entire season when the trees already started off with rust.

The three year olds (3YO), the ones due to be stumped soon, have so many beautiful blossoms. It’s such a shame to know those flowers will just get whacked off along with everything above the main tree trunk. We’re happy to see that the one year olds that were stumped earlier this year have blossoms. But since the trees are smaller, there aren’t as many flowers as the 3YO. This is the pruning discipline we apply to manage beetle and rust.

We are very pleased to share that our newly planted young trees, despite pigs and water stress, are all alive (except maybe a couple) and looking as well as possible given what they’ve endured.

So, for now, good news and we carry forward and roll with what life brings us.

In case you eat meat, a customer shared that they had recently eaten a fancy coffee rubbed smoked tenderloin at someone’s house. He shared this recipe:
https://pitbarrelcooker.com/blogs/food/coffee-rubbed-beef-tenderloin-with-charred-chipotle-salsa

That’s beef tenderloin. In case you’re interested, here’s a link to a recipe I had shared three years ago for pork tenderloin.

Bea made it, but I think she used pork loin, which is wider and fattier than a tenderloin, and often comes in a two- or three-pound package. Pork tenderloin will usually weigh around a pound, be about three inches wide and have little visible fat.

Calamondin marmalade is an ingredient in my version of that recipe. We have since had to cut our large, very dangerous- and difficult-to-harvest calamondin. It was in a pit near a lot of loose lava rocks. We have a new tree planted elsewhere which does have fruit, but we don’t yet have enough for marmalade.

In the meantime, a friend who has a farm with sushi-grade rice in Yuba County, CA, raved about the Nordmann seedless Nagami semi-dwarf kumquat. She said she had waited three years to get her tree and some small ones were available from a nursery, and they could ship to Hawai’i. The shipping cost two-thirds the cost of the tree. Nordmann means Norwegian person in Norwegian. Nagami is a Japanese name. My Chinese heritage isn’t represented in this tree, though; sorry, Dad. I felt we should have this tree and I acted immediately. The tree made it over beautifully.

One thought on “From drought to rain to Kona snow!”