‘Tis the season for poinsettias. The poinsettia shown as this post’s featured photo was our potted one from 2020 that we planted in the ground. So easy! It just has to survive accidental weed whacking, which the other poinsettia didn’t. It likes dry conditions during its “flowering” (colorful red bracts) season. They usually do better in drier Kailua, down below, than up here. But we’ve had two very dry months.

I remember trying to keep one alive and performing in Northern California. I even stopped watering at some point and put it in a dark, cool place to try and coax it to “bloom” the following year. It didn’t. It was still alive, but it wasn’t fun to just have a green poinsettia plant. If you’re interested here’s a recent newspaper article about growing poinsettias in Hawaii. (Even if you’re not in Hawaii, you might pick up something useful.)

Today we had a few short showers. Better than nothing, but not a soaker. I kind of expected a soaker, because yesterday we were out with the 100-foot hose and two buckets, watering the youngest coffee trees. I wouldn’t have been shocked, and would have been pleased, if it would have poured as we wound back up the hose, because that’s the way life often rolls. We hand watered several weeks ago, too. We waited over the weeks, thinking surely it’s going to rain some day, but when heavy clouds developed they never released anything or much. It was satisfying to see the little guys today, perky again versus sadly drooping. Unfortunately, we weren’t able to give water to all the trees. We just have to hope the mature trees will survive.

A year ago I wrote The scary act of planting trees for the future. That was followed in June with Well rained upon, the tree babies at six months old. The trees alluded to were trees other than coffee trees. Today, after the brief showers, we went out and took photos of them. Kind of like lining your kids up against the wall and drawing a line to mark how tall they’ve grown after a year. I reread those two blog posts mentioned above. Nature is amazing. Reflecting on the past year’s growth helps make up for the helpless feeling about these past two dry months. I recommend clicking on the top left photo and using the arrows to go through the photo series. 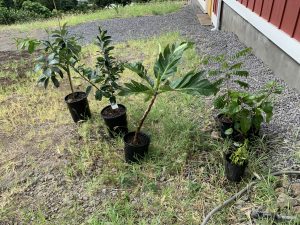 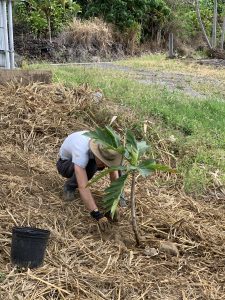 Our Ma'afalu 'ulu being planted in November 2020. 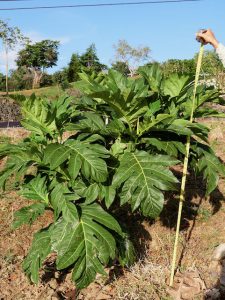 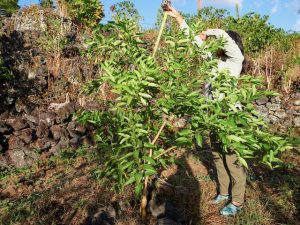 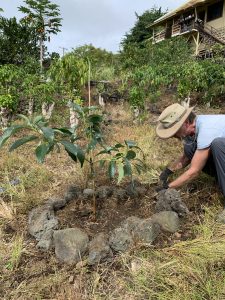 Avocado being planted in November 2020. 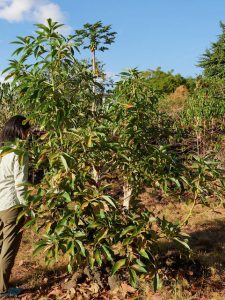 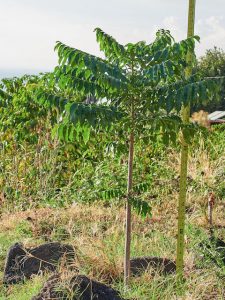