Not trusting memory alone, I make rough daily cryptic coded notes on a paper calendar about rain, tree blossoms, and tree care. I’m my mother’s daughter. She makes handwritten notes of sunrise and sunset on a paper calendar, and I think and/or say, “there’s an app for that.” But here I am, doing something similar. Our closest weather station is only a mile away, but it’s not quite the same as our farm. Plus, actively doing something keeps one (me) more observant and engaged.

As we got further along into October, I realized how long it had been since we got any sizable rain. It was just a few hours in the beginning of October. It’s odd how things suddenly hit you. Earlier in the year I suddenly realized it seemed to be raining every day. Now we’ve had too many sunny, dry days.

This is the rain chart for the Kainaliu weather station, a mile away.

We had a week of dry days in November, too, until yesterday evening. We got an hour of light drizzle, but the Kainaliu weather station didn’t measure any change in rainfall. We really need a good soaker rain.

We dry farm. Our trees get all their water through natural rainfall. Our trees have survived drought periods before, back when the volcano was active for decades. It’s hard to know if this half inch of rain in October is just an outlier in the dry season (in October 2020 we had three inches), or if it’s due to the volcano erupting again, or what. I reread this University of Hawai’i article, particularly the last paragraph addressing vog and rainfall, in Hawaii Rainfall Patterns. 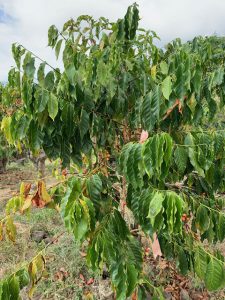 A youngster a day after receiving hand watering. 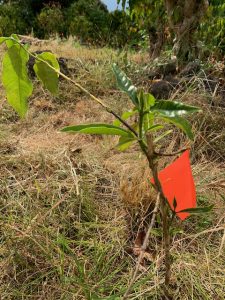 A youngster that had earlier lost its top to pigs. It's back!

The trees are droopy and stressed. We’re most concerned about the 120 new trees that were planted in July. Lately, the pigs seem to have been using them as toothpicks or objects of their aggression. We’ve counted 24 that have been damaged by pigs. We suspect the pigs are particularly acting up lately, also due to the lack of rain. They’ve been turning over large rocks, downspout guards/diverters, and plants. We think it’s to get moisture and the things they like in moist areas.

[Aside: Last week one morning we saw two dead pigs lying neatly on their sides on a driveway. We suspect a hunter got them, and someone else was supposed to pick them up.]

We loaded up the truck with our 32-gallon trash can sloshing full of water and made a few trips to the stressed seedlings. We used smaller buckets to hand water the most stressed youngsters. We also put little orange flags by the seedling sticks that had their leafed parts knocked off. They might come back. We don’t want those accidentally weed whacked.

While watering, we experienced one of Nature’s moments of hope and encouragement. In our peripheral vision, we saw something from above dive right into the middle of the nearby huge lychee tree. We looked inside and could see an ‘io, the only native Hawaiian hawk that lives only on this island, which came off the endangered list in 2020. We see it/them over our land every so often. It just sat there on a high branch inside the lychee umbrella. Then a second one came and sat on the nearby macadamia tree. A special, magical moment to savor.

One thought on “Trees drooping with hope for a soaker”