May was very rainy. I was getting a bit rain weary. Last week there was an article in the local paper about just how rainy it was in Kona. Some quotes from there … “one coffee belt gauge, Kealakekua, posted its highest May rainfall total on record, 12.86 inches, 240% of its average May rainfall total, and over 3 inches more than the previous May record, 9.76 inches.” And, the closest gauge to us, “Kainaliu, which registered 10.57 inches, 204% of its May norm.”

I found this information in a CTAHR coffee publication from 2008 about the Kona coffee belt, which they defined as 20 miles long and two miles wide:

Previous to 1983, the annual rainfall averaged 68 inches. Although since 1983 when Kilauea began erupting, it has been drier, averaging only 49 inches.

Rain, sun, rich volcanic soil. Things grow! I’ve written before of my fear of plants growing too well and causing us problems in the future.

We have an inner courtyard. It keeps the pigs out and the cat in. We can grow ornamentals and a few edibles which are within easy reach of the kitchen.

In mid-January, five months ago, I planted two-inch high seedlings. I didn’t even fertilize. From “11:00” in the photo, above the tiny plumeria leaves, clockwise: tulsi/holy basil (purplish leaves), Italian sweet basil, lemon verbena (barely visible), and the big plant in the foreground is African blue basil. The lady at one of the few small, non-big-box plant nurseries opined that the African blue basil makes a really nice pesto (friends/family have agreed). I have already cut the basils three times, almost two feet each time, to harvest leaves and remove flowers to keep up the leaf production. Yet they are 3-1/2 feet tall five months after I planted them. I’m going to have to figure out a solution for these.

And now, to the trees. It’s six months from the time we planted trees and time for an update.

The mgambo, not shown with an update below, has grown the slowest. I’m actually happy about that. For the others, click on the top left photo below to enlarge and read the caption, then use the right arrow to see the other photos and captions. 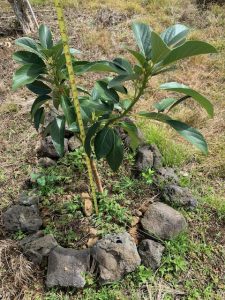 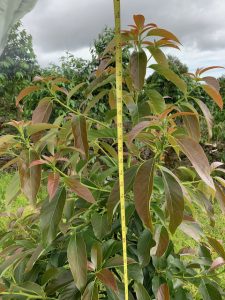 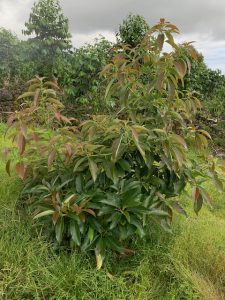 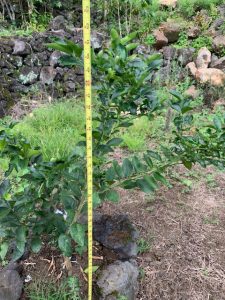 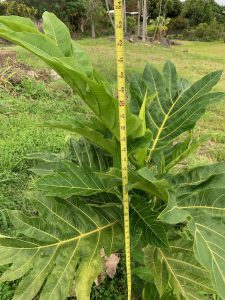 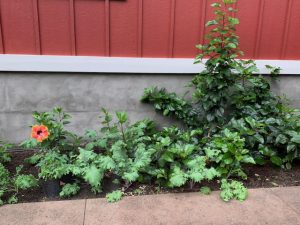 The native white hibiscus central leader is 6' 4". Other non-native hibiscus are to its left, with kale in the foreground.

The only tree casualty we’ve had is the rollinia. That was the sacrificial tree that still served to fine tune our little fire ant quarantine protocol. We hardly ever see rollinia (and still haven’t seen any cherimoya) at the nurseries, but we saw one again and bought it. Hubby planted it where the other one was planted (and died). Our fingers are crossed. And something fun happened! He found his reading glasses (required to see ants, if any) that he suspected had fallen in when he planted the first rollinia.

One thought on “Well rained upon, the tree babies at six months old”