It’s hard to believe Memorial Day is one week away. Weren’t we just celebrating the New Year? As a nation we pause and honor and mourn those men and women who’ve given their lives while serving in the U.S. military. Memorial Day is also the unofficial start of summer.

I’ve been surprised how many restaurants have still not opened since shutting down due to the pandemic. Unfortunately, some already have decided to close up their businesses for good. But with COVID-19 infection rates continuing to go down, and tourism picking up, it seems like more restaurants are coming out of hibernation and it appears some are trying to open starting this weekend. Life feels like it’s lightening up a bit, and it seems that the delicate, hopeful optimism in the air might be safe to trust.

On the coffee front, the fruit is green and ripening. All the flowering cycles are complete, though you can probably always find a few flowers on some trees somewhere. Right now I’d predict picking should go from late July/early August until December.

Here are just a few images from today. The first image is a healthy one year old. It was stumped in February 2020 and now has a lot of fruit. The other two photos show things we don’t want to see, but we like to “be real.” Memorial Day and military terms come to mind. Death (some trees don’t survive stump pruning). Invade, battle, and take over (what the autograph tree does). 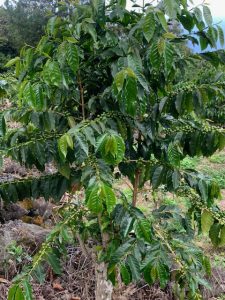 This tree was stumped last year and didn't survive. An autograph tree was happy to take over. From the dead leaves on the ground, there was an earlier attempt to take the autograph tree down. 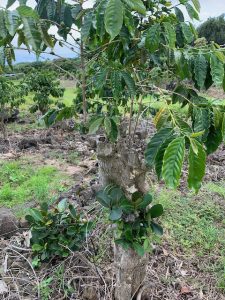 An underperforming one year old hosts a young autograph tree at its middle.

Weed trees are a big, unfortunate reality. I found a listing on Craigslist for someone from Hilo selling small autograph tree plants in pots. What??!! Hubby and I scoffed in scorn about that and said we could have a successful business selling those.

On our border with the ‘ulu co-op, the edge of their property has large autograph trees, Shefflera trees, and African Tulip trees, which have nice orange blossoms right now. Big trees, all invasive and pervasive in Kona. Rune was trimming a few big branches that were hanging on our side and met Ely from the Co-op who came up to him. Rune’s understanding is that Ely’s responsible for growing ‘ulu seedlings of different varieties. Ely asked if we’d be OK with them cutting those big (weed) trees. (YES, PLEASE!!) It might take a few years, though. It’d be so much more appropriate to have many ‘ulu growing there.

The website invasivespeciesinitiative.com says this on their page about African Tulip: “Now a widespread and problematic species throughout Australia and the Pacific Islands, including Hawai’i, the Galapagos, Fiji, Palau, and more, it was largely intentionally introduced in the 1900s as a street and household ornamental tree.” So many problems we have here (invasive plants, mongooses, wild pigs, etc.) were introduced as a solution to some other problem or as an “improvement.” My uncle frequently bemoans the change in the Kona landscape, obfuscating beautiful views, over decades because of a variety of large invasive trees, including the African Tulip. But coffee is also non-native and was brought here, intentionally introduced, to Kona in 1828. At least it isn’t invasive.

4 thoughts on “Invade, Battle, and Take Over”