We did something new for dinner last night.

When you read the rest of this, you’ll probably wonder what it has to do with coffee or coffee farming. Directly, not a lot right now. We are concerned about the viability of coffee farming and have to be open to what else is out there, and what would be the best use of the land/’aina. It’s not about extracting the most money out of the land. Agroforestry and sustainability definitely have an appeal. What about growing other crops WITH the coffee trees?

I wrote in a February blog post that the Hawai’i ‘Ulu Cooperative is one of our neighbors. I believe in and support their mission, and I’ve been subscribing to their e-newsletter for a while. They do a very effective job with modern food marketing and education. They’re working on building a market (demand) for ‘ulu (breadfruit) and its co-crops. They’re doing such a good job with the ‘ulu, they’re all sold out of the fresh ‘ulu that is par-cooked and frozen. But it’s still not uncommon that people haven’t tried breadfruit. Our friend who lives in Maui shared, “Ulu scares me, but not as much as noni.”

‘Ulu is highly seasonal and the fruit matures around July-October, and there’s often a glut of it. But then fresh fruit isn’t available most of the rest of the year. The co-op prepares and freezes ‘ulu when that glut happens. And the co-op also markets ‘ulu’s co-crops (purple sweet potato, kabocha squash, taro, mango) that grow well with ‘ulu in diversified agroforestry environments.

One of their recent curated boxes was Co-Crops and Cocktails and featured recipes and a cooking demo by Chef Dan Robayo of Magics Beach Grill. [I really like that restaurant — it’s a modern menu, and they make creative drinks and dishes trying to use local ingredients as much as possible. It feels good to eat there — it’s airy, open, and bright, and decorated with art from a variety of local artists. ] I’m not the type that watches cooking shows, nor have I been a big Zoomer during the pandemic. This curated box just caught my interest, and I want to support the co-op. I’ve been eyeing their products more as special gifts for mainlander foodie friends than as items for us, though I often buy the ‘ulu hummus. I usually would buy this type of produce fresh at the farmers markets, but then there are always those times when something isn’t in season. And now I’ve experienced the convenience of prepped ingredients.

I picked up my box on Friday. It was my first time there. While I was waiting for them to get my box, I walked to the rock wall border. It was interesting to see our property from their perspective. I told them we’re their neighbors, and the lady told me that they’ve seen piglets go from their property to ours. I haven’t seen the pigs or piglets in years, but we definitely have seen (& sometimes hear) evidence of pigs. 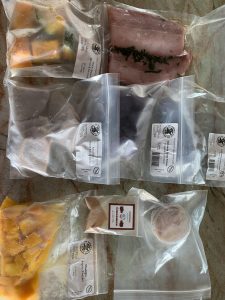 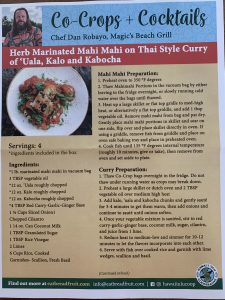 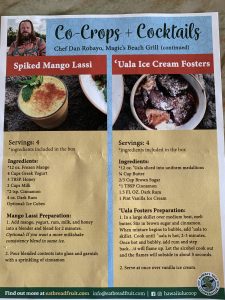 In any case, we made the spiked mango lassi cocktail to enjoy as we watched the hour program, which included a half hour live cooking demonstration in the chef’s home kitchen. We could’ve just used the provided recipes and box ingredients and skipped the show, but I wanted to experience the whole shebang. Part of the program was “meet your farmers,” and it also included drone footage of the co-op (& a quick glimpse of part of our property as collateral coverage).

We made the Thai red curry mahi mahi main dish afterward. It came out delicious! It used three co-crops (purple sweet potato, taro, and kabocha squash), and it sure was nice when they were all already prepped and par-cooked. It would have taken so much longer to have prepped each, and the curry would have taken much longer to cook. We made a pot of rice. [Aside: people often tell me I’m the only Asian they know who makes rice on the stove, i.e., not in a rice cooker. But Bea and my brother are others! ] We forgot to serve the curry with the rice. We didn’t need it anyway, the co-crops were all starches.

Chef Dan made all three recipes in just about 30 minutes in his home kitchen. Bravo! The dessert is ‘uala ice cream Fosters. We’re going to wait on making that one. We thought it’d be too filling after the cocktail and curry, even without rice.  Perhaps we’ll use our upcoming guests as guinea pigs. You know who you are. You’ve been forewarned. Let’s hope we don’t burn the kitchen down.

3 thoughts on “What do you think co-crops are?”