Time for another break from coffee. I think it’s so interesting how sometimes many small things you do, read about, learn of, and/or see sometimes all come together. I was mucking around with our taro and thought I’d like to share the experience, so I took some photos. I like the idea of a farm with a variety of edibles on it, not just growing a mono crop for cash. This article in Ke Ola magazine about agroforestry struck a chord with me. I referenced it in this blog after we saw The Biggest Little Farm.

We just attended the first meeting (held on Zoom) by the breadfruit people, an introduction to breadfruit for economic, environmental, and cultural sustainability. Important to them is community, sharing knowledge, and regenerative vs. extractive agriculture. And who was the organizer? Craig Elevitch, the man in the Ke Ola article! Also important to this group is the cultural component, the spiritual underpinnings. The meeting opened up with a gentleman who paused and grounded everyone, including a prayer in Hawaiian, also given in English. He expressed heartfelt gratitude for the sun, the earth, water, plants, community, etc. It reminded me of the book I recently read, Braiding Sweetgrass.

In any case, the organizers of this breadfruit meeting are in a different league than us in terms of farming, agroforestry, etc. I feel fortunate for simply having family and friends who give us various things that they’ve grown, for us to eat and to plant. And they pass on their knowledge and hands-on experience.

I’m growing edible ginger for my first time. My aunty reassures me that I can’t kill it. I’ve planted it in a few places, including in a pot, and I’m looking forward to learning about it. Many weeks later nothing has come up! And rain has washed away some of the dirt that was covering some of the roots. I’m just leaving those as they are to see what happens. My mom reassures me that ginger will grow when it wants to.

A few months ago my friend gave me an araimo (called sataimo in Japanese) type of taro plant, and it’s now quite big. (side note: the university extension CTAHR has listed 74(!) varieties of taro in Hawaii.) Then three weeks ago she came over with a much smaller taro (same type) with a 2.5″ diameter root attached. Upon her instructions, I cut off the root to eat and replanted the plant. The plant she gave me months ago that’s in our ground is considerably larger, so I felt I probably missed the harvest time. In the meantime, my mama plant pushed up a lot of other keiki (kids).

So I decided to dig them up the other day to see what I have. I couldn’t dig out just Big Mama, so I had to uproot the whole family. The mama’s root wasn’t a nice ball/bulb, but I kept the half sphere I had. The kids’ roots were pretty small. I replanted all the kids, with their roots intact, except one. I did keep one root of a kid, just to try. I replanted Big Mama in a separate area, without her root; I’m curious if she’ll survive. My friend said to wash the roots and leave them in the sun to dry for a day to make them sweeter. 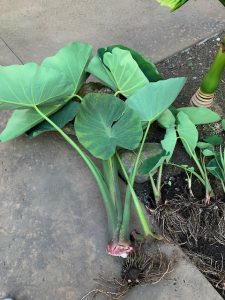 I wanted the root of the mother taro, but there were many babies surrounding it. I dug them all up. 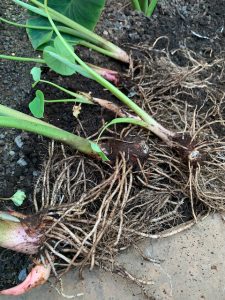 There didn't seem to be bulbous roots for the keiki/kids. 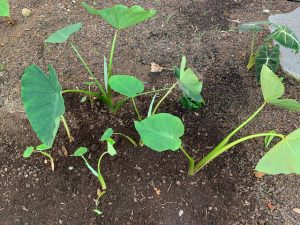 The roots were too small, so I planted all of them back except one. 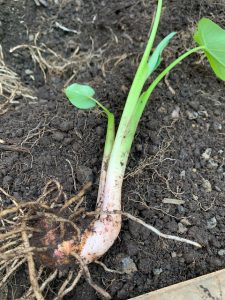 This taro root is going to be tasted. 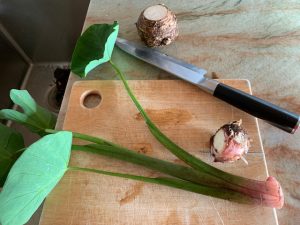 Taro root separated from the above ground plant. In the background is a root that my friend harvested 3 weeks earlier. 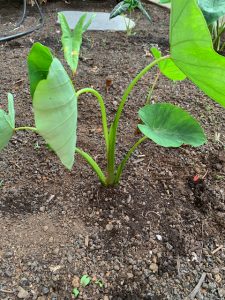 After the root was separated, I replanted the plant. 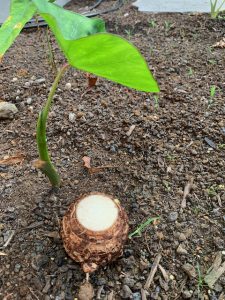 This is the plant my friend gave me three weeks earlier. I separated the root and immediately replanted the plant. It took. I just placed the root there for the photo.

It feels strange to cut off the root and just stick the plant in dirt without any root bulb or little roots. With pineapple starts, you first grow some roots, a process that takes weeks, before sticking the plant in the ground. Uncle Harold saves every single pineapple top, I think. He’s given us many starts. (His fascination with mangos is another story for another post.) 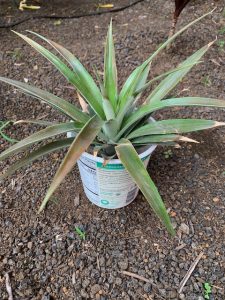 This pineapple top is resting in a yogurt container with water high enough to reach its bottom. 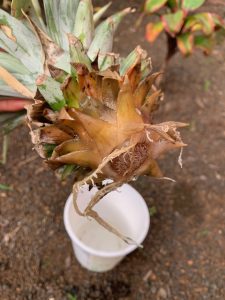 Pineapple top with roots. This can be planted in dirt. 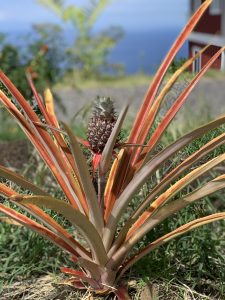 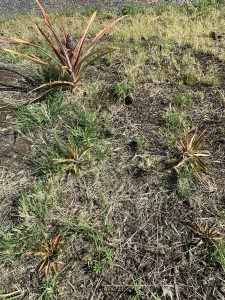 Pineapple starts. A few have been hit by the weed whacker.

The photos below show the taro the morning after planting the rootless plant, and three days later. You should be able to slide the arrows to easily compare each set of two photos. The first comparison is of the kid, and the second set of two photos is Big Mama. The leaves are suffering more, but notice the stalk is becoming more upright.