Many people seem to be surprised that we’ll have coffee this year, this first year of the Bea’s Knees Farm business.  Although the business is new, the farm is decades old, and coffee berries have been produced every year.  What’s new is that instead of selling the fruit to others, we’re going through the multiple steps required to directly offer quality, roasted estate coffee beans.

Part of this endeavor is employing a pruning method new to this farm.  Because it’s new for us, I’m blogging about it.  It can take months to years to know the effect of experiments you try.  The blocks that have been stumped won’t be contributing to this year’s offered coffee beans, because there won’t be fruit on these.  These stumps get to focus on just growing, and just the most healthy three vertical branches on each stump will “make the cut” to be the fruit producers for the following two years.

Here they’re shown after de-suckering and initial vertical selection.  Right now there are five contender verticals on each tree.  In a couple of months, we’ll choose the top three that will remain.

These two pictures below were taken from the approximately same location, three months apart.

We were trusting that this style of pruning, block stumping, would work.  It’s hard on the trees and risky because trees might die.  Luckily, it rained before and after stumping — the best scenario.  And the stumps are alive! 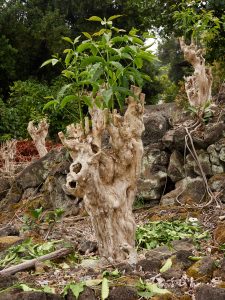 This example tree shows its long history of previous years’ pruning.  It was stumped higher than it would have been if the tree were always pruned with the stumping method.  We wanted to be conservative to increase the likelihood the trees would survive, and we weren’t sure how these trees would handle it.  Now that we see how the stumps have rebounded, next year’s block of trees to be stumped will probably be cut lower.  That will make it easier to pick the fruit since the branches will be lower.  And my personal hope is that it’ll be below any holes in the trunk structure, so we can reduce the number of mini rain reservoirs that can breed mosquitoes!

One thought on “The Stumps Are Alive!”